The Life of Seon Master Daehaeng 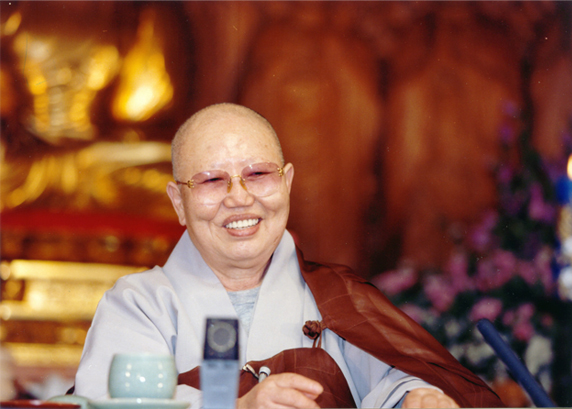 Given the Dharma name “Daehaeng” and the special Dharma name “Myogong” at her Dharma transmission ceremony, Seon Master Daehaeng was born in 1927 in Seoul into the Noh clan of Gyoha, the first daughter of five children. Her father, Noh Baek-cheon, who was married to her mother Baek Gan-nan, had served as an army officer for the last king of Korea, and continued his resistance to the harsh Japanese military rule.

Eventually he was blacklisted, and all of his land and property was confiscated. Being left with nothing, the family settled on a mountain peak in Heukseok-dong, Dongjak-gu, Seoul, where they built a makeshift dugout hut.

Forced to wander the mountains cold and hungry, Daehaeng witnessed the harsh reality of the peasants who clung to life in the mountains and valleys, impoverished and disease-stricken, suffering from pain and agony, and clad in rags. She imagined herself performing acts of generosity by bringing them food, clothes and medicine to cure their diseases, while harboring her own inner doubts about human existence and the myriad differences that exist in the universe.

These circumstances naturally led her to focus inward and she had her first glance of her inherent true mind, like flowers growing from a rock, at the tender age of nine.

When Daehaeng was 14 years old, she became associated with Master Hanam (1876－1951), and received the Dharma name Cheonggak from him at age 24 in 1950. For the next ten years she engaged in unhindered practice, transcending being and non-being, led by her true inner nature and taught by all things in nature. At last her insight penetrated the nature of all things as they are, like a timeless, cosmic hair pin having skewered all things in the universe.

In 1960 she arrived at a hut located beneath Sangwonsa Temple on Mt. Chiaksan and settled there to teach. Upon seeing people groaning in pain, unaware of their own inner inherent and inexhaustible treasure, she vowed to help these people realize their inherent true nature, which she called “Hanmaum [One Mind]” or “the True Master [Juingong]. ” In 1965 she descended the mountain and began to teach full time. After establishing Hanmaum Seon Center in Seoksu-dong, Manan-gu, Anyang in 1972, her teachings began to spread like wildfire. Dozens of branch centers have since been established both inside and outside Korea, and followers flock to study together her teachings to illuminate themselves and others by awakening to their original nature, which is their true teacher.

For over 40 years after that Ven. Daehaeng dedicated herself to teaching others without regard to time or place to help others awaken to their true inner Master; she taught by highlighting the meaning of life, and let people have a taste of the Way by showing them how to practice. Then, on the first day of the fourth lunar month in 2012, she entered nirvana at the physical age of 86, Dharma age 63. 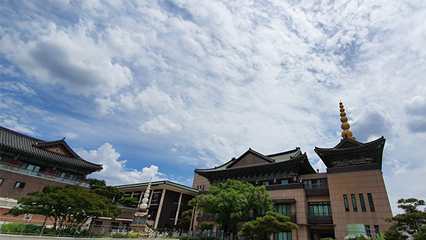 As of 2018, 150 fully ordained nuns and monks, along with lay Buddhists, dedicate themselves to Dharma propagation and practice at the Hanmaum Seon Center in Anyang, the headquarters monastery, and at 25 branch centers in Korea and abroad.