Remarks from the Venerable Chair of the Board

I extend my sincere gratitude to visitors of the Center for Daehaeng-Seon Studies.


We began to provide an online Dharma platform to highlight systematically and inform interested persons more broadly about the teachings and life activities of Seon Master Daehaeng, as well as to propagate more widely an easier way to understand how the mind functions and how to put it into practice. I hope this website can connect many people to the appropriate causes and conditions that will enable them to attain the wisdom of their own inherent Buddha nature. 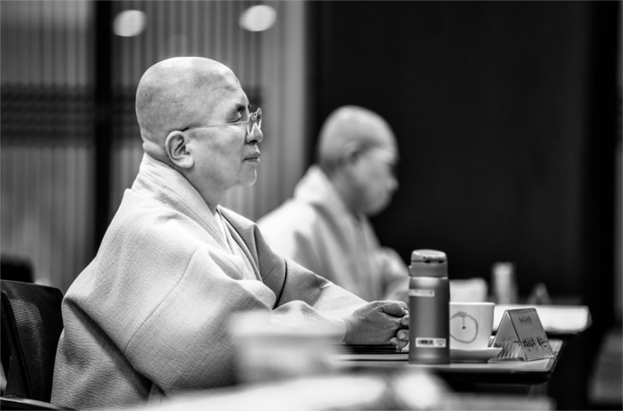 Seon Master Daehaeng always reminded us to practice contemplation in daily life, whether we are walking, standing, sitting or lying down. The practice of studying and putting that study into action “here and now,” which Ven. Daehaeng opened our eyes to, transcended the limitations of traditional mountain-centered Buddhism. Not only that, it created an unprecedented sensation as a form of urban Buddhism more suitable to our new era. Since its founding, Hanmaum Seon Center has become a role model for the propagation of Buddhism in larger cities, and a leading “practice monastery for meditation in daily life.”


The varied life activities of Ven. Daehaeng gave her the experience and wisdom to guide us to apply the principle of the One Mind [Hanmaum] which penetrates all things, first to ourselves, then to families, societies, nations, and ultimately to the whole world. She taught irrespective of time or place, irrespective of gender, and irrespective of ordination status. Our goal at the Daehaeng Seon Institute is that the teachings of Ven. Daehaeng can be researched, distributed and practiced at a deeper level by many scholars and students.

Looking back, Ven. Daehaeng taught from the position of “act without acting.” Just as Gwanjajae [Avalokitesvara] Bodhisattva has One Mind in the universal foundation even as his 1,000 hands and 1,000 eyes pervade the world, the profoundly deep compassion of the Master toward people was conveyed in various ways suitable to their individual capacities and regional characteristics. I look forward to the day all living beings understand the teachings of the Master with one accord and attain Buddhahood, like the moon reflected in 10,000 rivers. I hope the fourfold Buddhist community can unite in this effort so that the Daehaeng Seon Institute can fulfill its role until that day arrives.